When advanced drivers’ assistance systems (ADAS) initiate an emergency brake or try to bypass a detected object, they must first detect and identify the objects and then determine the reaction. In many cases, a camera with a trained object detection system can do this job. Nevertheless, this object identification is frequently backed up by an additional radar system, especially in adverse weather conditions when the visibility for the visual camera is poor. This combination of different sensor types has become standard in ADAS systems and is typically achieved by sensor fusion.

When visual cameras and radar systems “look in different directions” due to an imperfect alignment, the processor will be misled, thus creating a potential false judgment of the scene, which can ultimately lead to an accident.

To avoid these situations, it is absolutely necessary to calibrate and test the orientation of both systems to each other. Image Engineering approached the Fraunhofer Institute for High Frequency Physics and Radar Techniques FHR to enable such a calibration. In cooperation, both institutions developed a system that combines a visual test pattern with a newly developed active radar reflector. 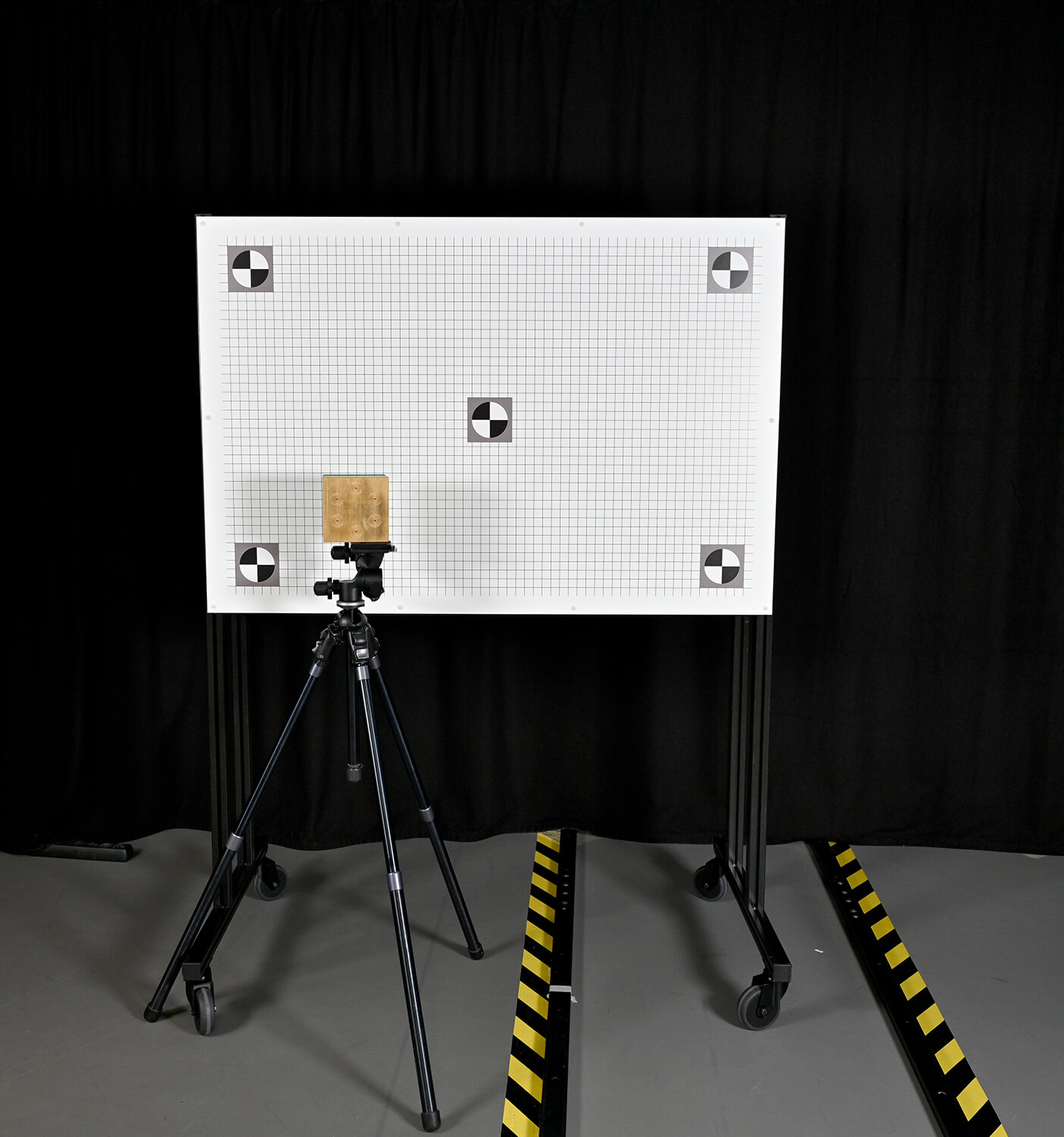 A visual test chart usually consists of 2D printed structures that are visible to cameras in UV, visible, or near-infrared light. However, no matter which material these charts are printed on, the position of the printed structures cannot be identified by the radar system. As a result, a combination of a test chart and a well-aligned radar reflector is needed. This combination has to work at relatively short distances, such as in labs, on production lines, or in repair shops (e.g., after accidents).

Conventional radar reflectors consisting of three orthogonal plates, known as corner reflectors, are unsuitable because of their depth. Since the reflection occurs in the very corner of the reflector, the reflection is displaced from the visual calibration mark on the test chart if the corner reflector is placed directly behind the chart. Sensors located at a distance of 1 m in front of a screen and a corner reflector of 10 cm depth can experience angular errors of up to approx. 3° under certain viewing angles. Such angular errors can already cause a vehicle to be assigned to the wrong highway lane at a distance of 75 m, a significant problem for the safety of ADAS functions.

For this reason, Fraunhofer FHR developed an entirely new active radar reflector system in which the reflection occurs under precisely the same angle as seen in the visual calibration mark. Dr. Thomas Dallmann from Fraunhofer FHR discussed the process: “We expected this task to be much simpler than it was in the end, but we are very happy with the system we developed and its excellent performance.”

In the end, the approx. 10 x 10 cm reflector (image of the reflector) will be mounted in the center or at various positions in a frame behind a radar transparent visible test chart (image of the system). The chart can incorporate target markers as well as other structures needed for alignment and testing. Even custom designs for individual camera manufacturers are possible. The operational distance for the alignment depends on the individual requirements, the field of view of the cameras, and the radar systems. Behind the setup, a radar-absorbing wall is installed to avoid reflections by surrounding materials that may cause errors.

Image Engineering offered to produce the final system and will act as the contact point. The pricing of the system and the exact availability will be announced soon. 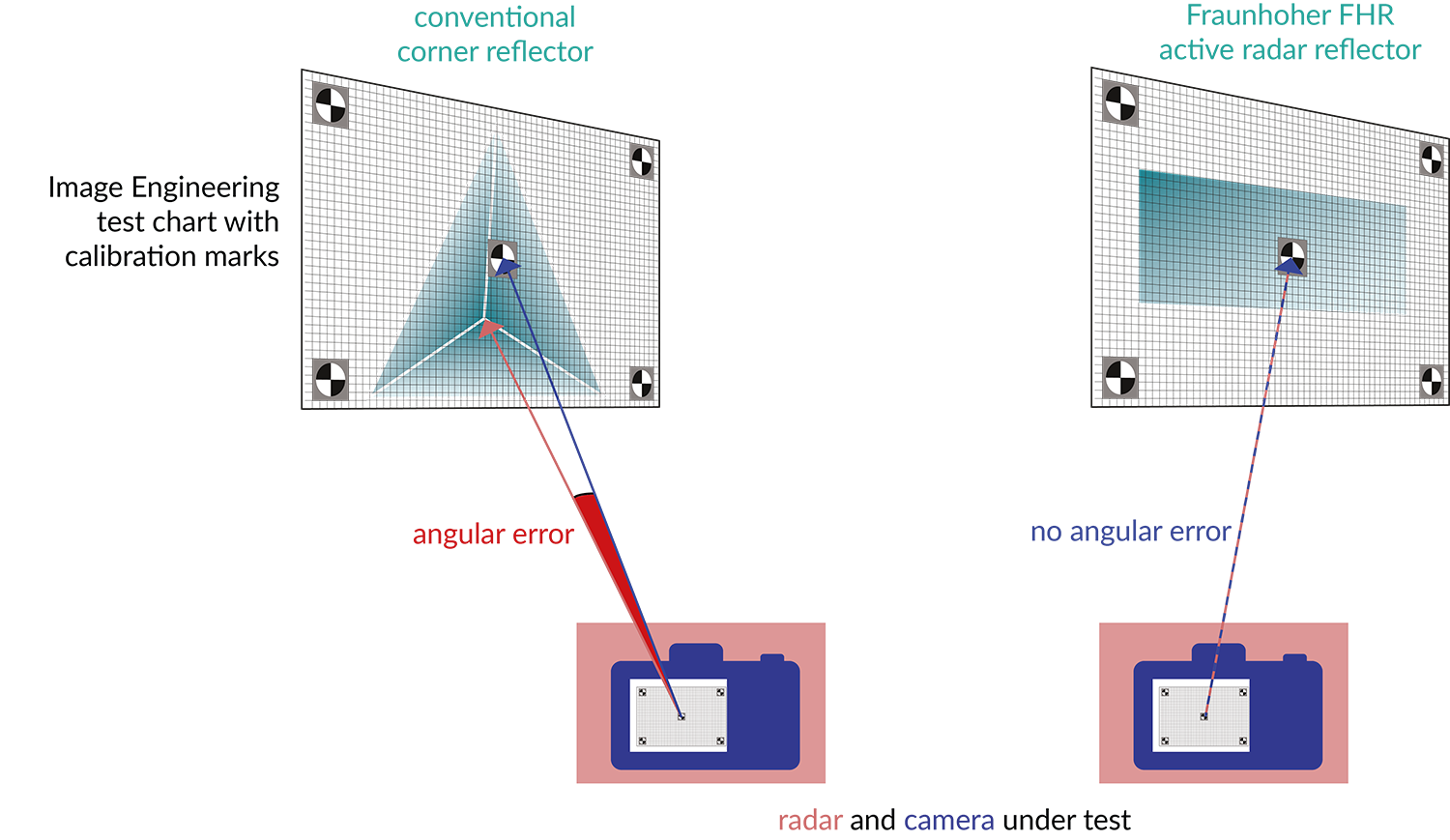 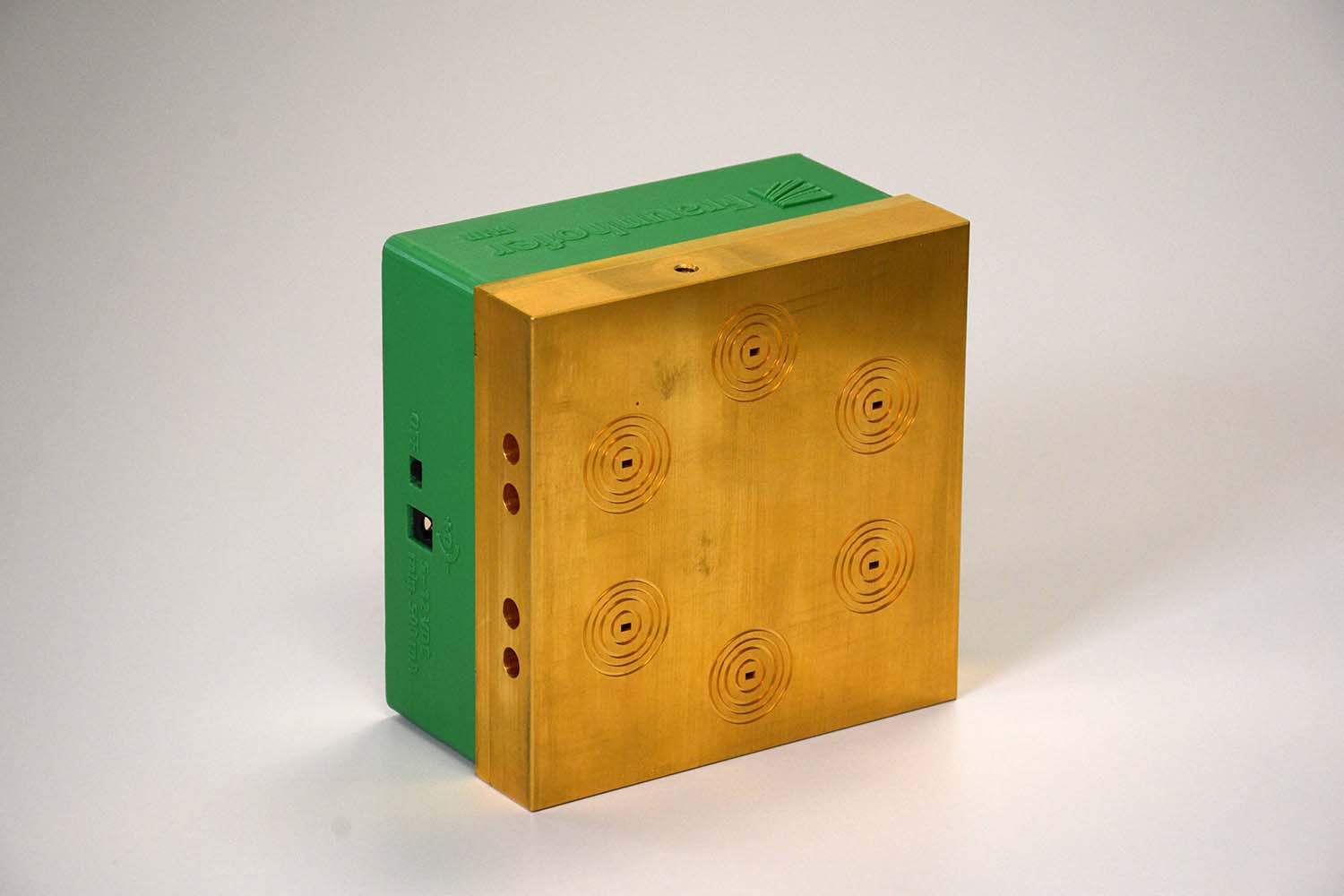 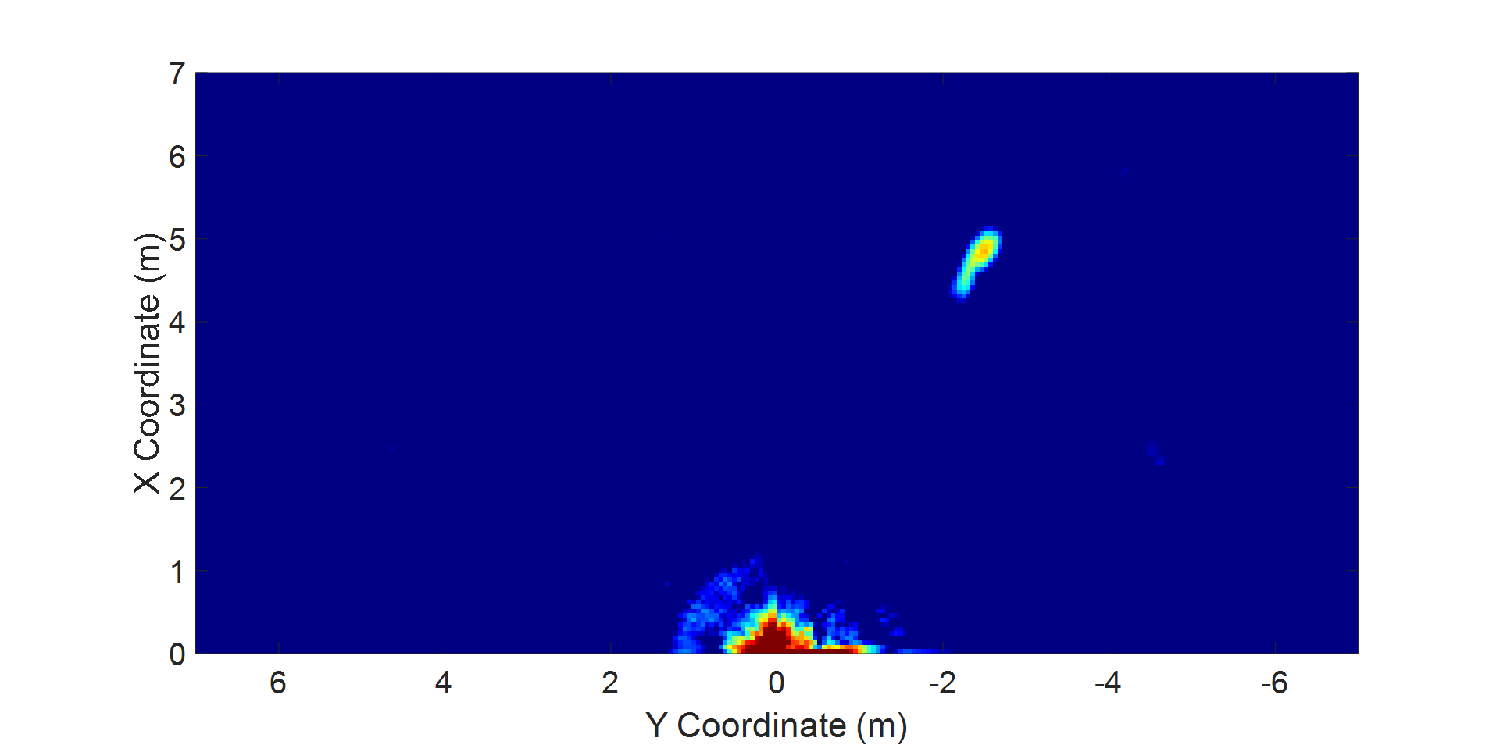 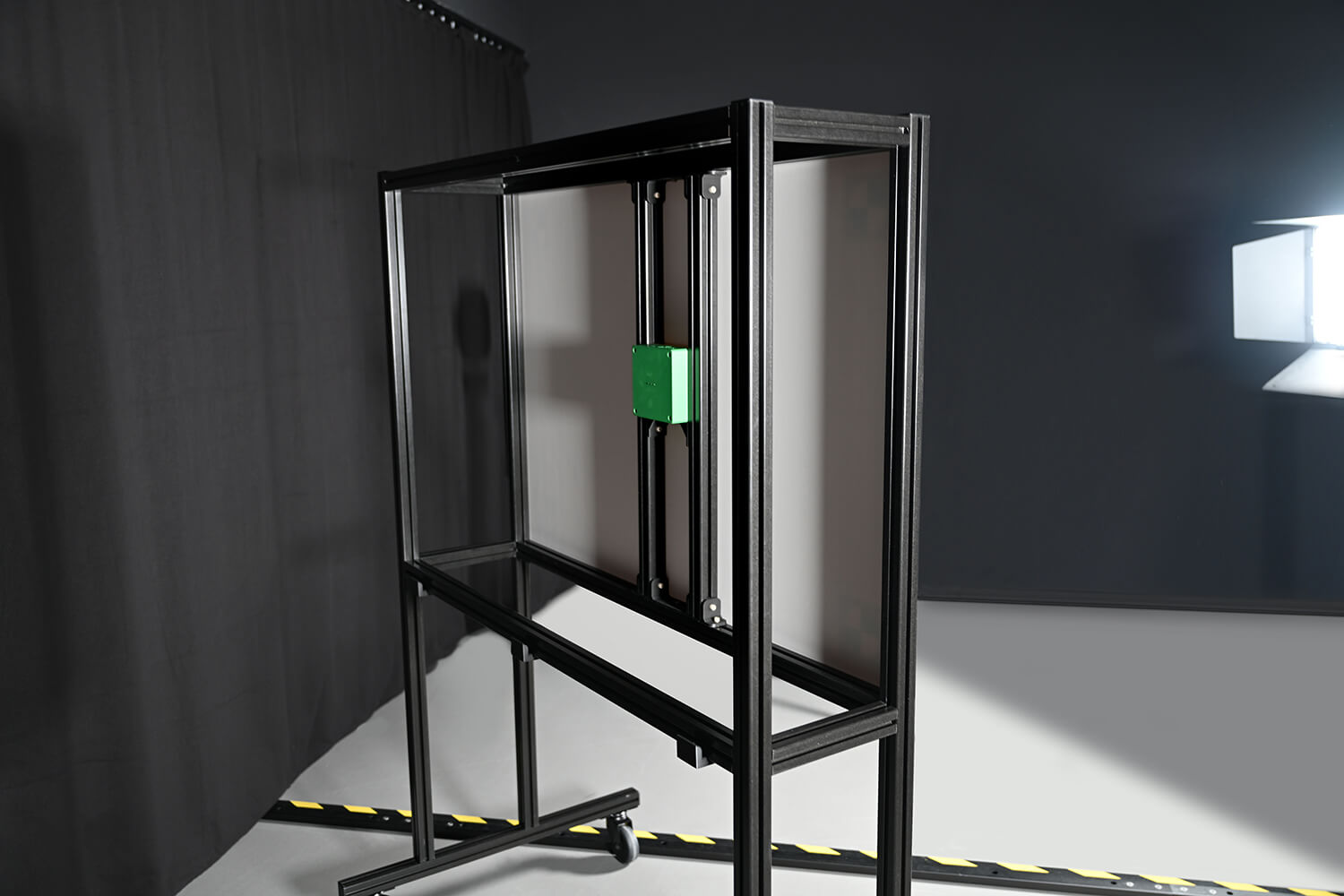 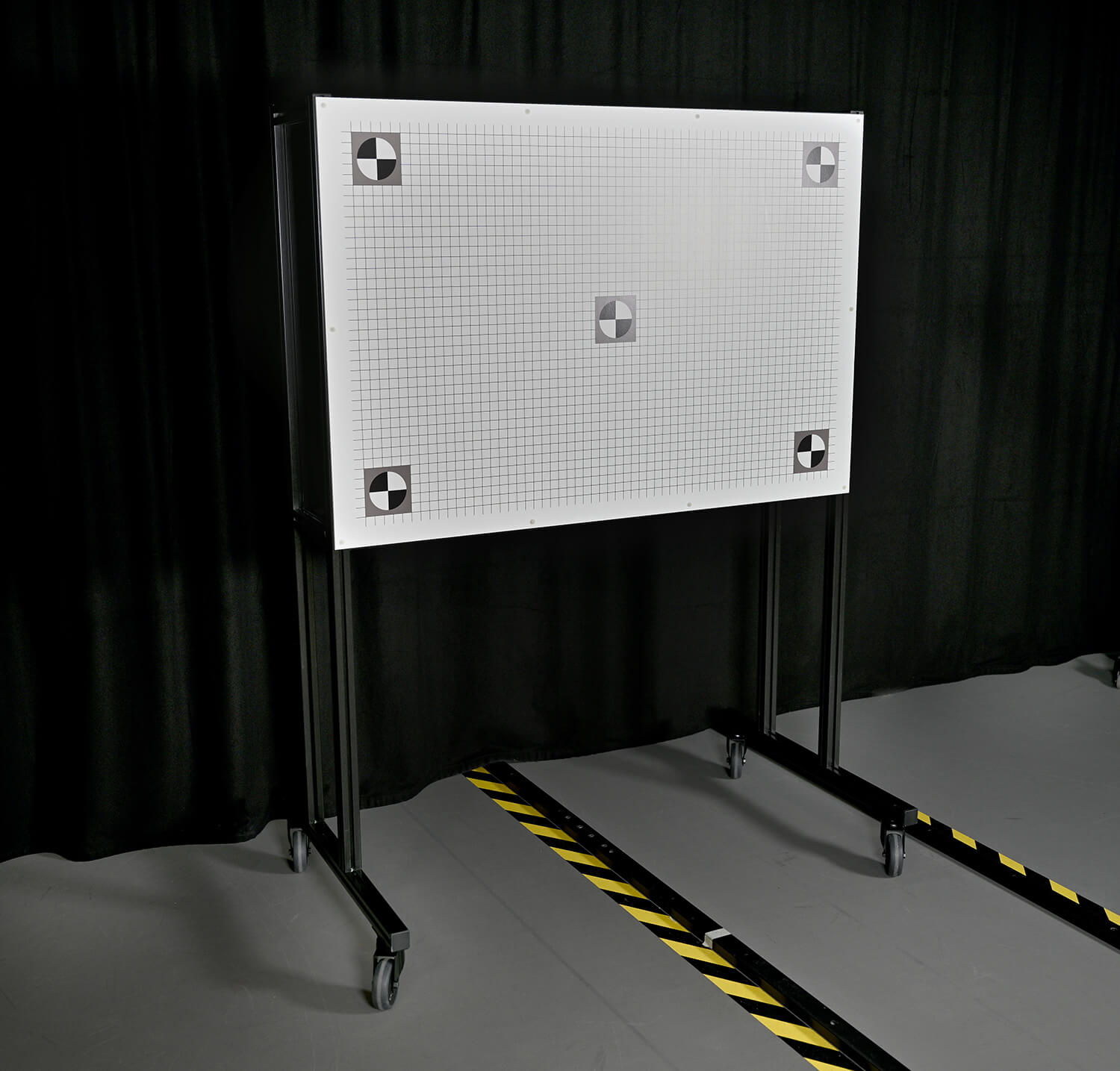 The Fraunhofer Institute for High Frequency Physics and Radar Techniques FHR develops concepts, methods and systems for electromagnetic sensor technology, particularly radars, implementing modern methods of signal processing and innovative technologies, ranging from microwaves to the lower end of the terahertz band. With a budget of €32.5 million in 2015 and more than 300 employees, Fraunhofer FHR is one of the largest radar research institutes in Europe.

The most valued competencies of Fraunhofer FHR – numerical calculation of electromagnetic fields, high-frequency technology and sensor signal processing – enable the institute to design, develop and implement complex high-frequency systems, executing each step in-house. Fraunhofer FHR unites leading-edge technology with sophisticated methods of signal processing to devise new types of systems. This is accomplished by the interdisciplinary collaboration of physicists, engineers and mathematicians.

Founded in 1995, Image Engineering is the world’s leading manufacturer of camera test equipment for image quality and performance. Our test charts, analysis software, measurement and illumination devices provide companies with the means to test and evaluate the quality of their cameras more accurately.

Over the years, we have expanded into numerous industries, including photography, mobile phone, automotive and ADAS systems, security, broadcast, machine vision, medical/endoscopy, and scanner and archiving. Almost any company that relies on high-quality imaging can use and benefit from our wide range of solutions.